THE YEAR'S WORK OF A GUERNSEY BEEKEEPER 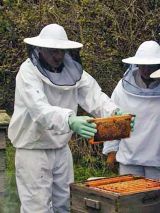 Please note, the monthly information shown is only a guide as the seasons have proved very variable of late -- who would have forecast that we would be having heavy snowfall and blizzards in Guernsey in March 2013. 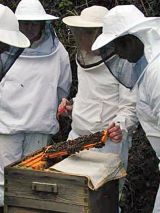 The Beekeepers year starts in late Aug/early Sept when any honey has been harvested and the bees are being prepared for winter. Honey can be taken off later, but try and do it before the bees go to the ivy as this honey is harder to extract and is an acquired taste for many people. If you collect your honey early and treat promptly, your winter bees will have been bred with a low mite and disease burden

To Prepare For Winter:

You want bees in best condition for a good start in the spring, and disease free as far as is possible e.g. Varroa under control.

Most will treat for Varroa at this time (if required) with a Thymol containing treatment.

Protect from pests such mice by reducing the size of the entrance.

Ensure the hive is waterproof and well ventilated to minimise condensation.
Ideally ensure the colony has a new young queen who is more likely to survive the winter and continue laying until late in the next season. If an old queen has been in residence and there are several frames of brood, check for supersedure.

Feed with sugar syrup (thick, 2 lb sugar per 1 pt water) so that with any stored honey the colony has ca 40 lb (if it fills a national brood box only) or 60 lb (if it fills a brood box and a half or a larger brood chamber). Be sure to only put feed on in the evening. White caster sugar is best (icing sugar has other ingredients included) - Do not use brown sugar as this gives the bees dysentry.

Secure The Hive Against Gales.

During winter, repair equipment. Treat stored supers against wax moth & nosema (wax moth loves old brood comb – more nourishing!) and even more importantly any stored brood boxes and empty comb frames by running over the surfaces with a blow torch, also acetic acid can be used if you are confident with this product.

The rate of egg laying is decreasing,

The nectar flow is very low, dependent on a few species such as ivy.

As the temperature drops below 7 deg C the colony will form a cluster (for warmth) within the hive. The temperature of the cluster is a lot less than that of the brood comb.

In the apiary heft the hives from time to time to ensure colonies have sufficient stores especially from Feb onwards.

Many beekeepers in the UK at about the end of December, when the colony should have no brood, treat with oxalic acid (3.2 %, 5 ml per gap between the frames) against varroa. This may not be a good idea in Guernsey if the month is warm as brood may be present.

If necessary, if colonies are running short of feed apply a block of candy (fondant) above an open hole in the crown board.

Laying may stop in December.

Laying starts again as the days start to lengthen in January. The brood will need to be kept at about 35 deg C, so the
colony will need much more energy to achieve this.

Help The Colony In Its Build Up.

Laying usually starts, albeit at a slow rate, as the days start to lengthen. Supplies of pollen (snowdrops, crocus, Hellebore, some types of Camellia etc) are needed.

If the colony needs feeding in March or April a contact feeder should be used, rather than a Miller or rapid feeder.
Within 3 days of the queen starting to lay, the workers will need pollen to feed the larvae.

Depending on weather conditions spring clean the hive in preparation for the new season – ensuring the floor is clear of debris, any damaged frames are replaced, open up the entrance size, etc

1. Is there sufficient room?

2. Is the queen present and laying the expected quantity of eggs? Does the pattern suggest a problem?

3. Is the colony building up as expected? Or later in season: are there any queen cells present?

4. Are there any signs of disease?

5. Does the colony have sufficient stores to last to the next inspection?

Whilst doing inspections take the opportunity to carefully spread the brood area until the queen is laying on all brood frames (hopefully by mid/end-May).

If you are confident with the procedure, ensure queens are found, marked and (if required) clipped – there may have been autumn supersedures and spring, before the colony is large is an easier time to find any unmarked queen – and a safer time to risk damaging her than late autumn, when the colony would have no chance to recover.

In April and onward it is essential that colonies are inspected on a regular basis for signs of swarming – every 7 days where the queen is not clipped, every 14 days if she is.

Hopefully by now it is warm enough for the colony to tolerate a longer inspection
In exceptional years colonies can swarm as early as the beginning of April.

Ensure supers are provided to give the colony space. Add the first super when the bees have drawn out ¾ of the foundation; and extra supers when the last one added is 2/3 full.

Use strong colonies with the best queens to establish nucs as part of a queen rearing programme and to provide replacement queens for following year.

There should be reasonable nectar flows now until June. This should be reflected in the filling of supers with honey.

The Bees should be collecting lots of pollen.

If there is a lot of pollen in the hive(s), the beekeeper can collect and store it as it can be useful in times of dearth and to give colonies a quick start up in the spring, also it can be handy if bee breeding is contemplated.
Collected pollen should be quickly stored, frozen.

In normal seasons the chances of swarming in late July and after are low.

Consider reducing the size of the entrance if concerned about wasp attacks or robbing. A wasp trap (bottle with jam and water), or an artificial wasps’ nest (sometimes called a “waspinator”) can also be useful in reducing attacks on the hives.

July should see another good nectar flow (blackberry, lime (not every year), willow-herb)

It is advisable to not add any more supers in the last 2 weeks of the nectar-gathering season to ensure all supers are well filled prior to extraction.

Clear supers, Collect and extract honey. The timing depends on local honey flows. It is recommended to collect up to the end of the main flow, but before the collection of nectar from ivy starts (Oct), and with sufficient time to complete disease and pest treatments and breed some healthy winter bees.

Check colonies for acarine and nosema. Start any necessary treatment after collection of honey.

Stop any pollen collection you are carrying out.

Please note, the monthly information shown above is only a guide as the seasons have proved very variable of late -- who would have forecast that we would be having heavy snowfall and blizzards in Guernsey in March 2013
Next
Previous