As I write this we are under the threat of a storm and reports of grumpy/angry bees have been coming in.

Bees don’t like changing air pressure which are often linked to stormy weather. Scan the weather forecast for potential storms as even if it doesn’t appear to be stormy here, storms off shore can be picked up by the bees.

Using a little more smoke than normal in these times can get you out of trouble and if you think the bees are a little grumpier than normal shut them back up and leave them alone for a few days.

The spring flow of nectar is starting to reduce and with the reduction in mowing and strimming this year caused by the lock down, the spring honey crop has been good. Many people have removed and spun supers early to get empty supers put back on for the brambles which are starting to flower.

Swarming appears to have been less this year, but keep an eye on hives as this may have simply been pushed back into the year and we could still see many hives swarm if we stop checking.

There appears to have been several hives which have come out of the winter drone laying. This seems to relate to supersedure in the autumn and a failure to either mate or get multiple mating’s. This is probably due to too the wet weather we had back in September/October.

With drone laying colonies it is essential to find out if it’s a drone laying queen or laying workers due to a lack of a queen. If it’s a drone laying Queen there will still be a good laying pattern in the hive with single eggs per cell. It’s just the eggs won’t be fertilised and so drones are produced. These drones are often smaller than normal as they have been produced in worker cells. With drone laying workers the laying pattern appears to be hit and miss and multiple eggs can be found in a cell. Care should be taken though as new queens that have just started to lay often start to lay multiple eggs in cells for a few days or weeks until they get a grip of what they are doing.

If you believe it’s a drone laying queen the easiest way to rectify the problem is to remove the queen and either merge with another colony using the newspaper method or to add a frame of eggs and young larvae and let the colony raise a new queen.

With laying workers the colony believes they are queen right as they have eggs being laid and there are usually several workers laying. If you add a frame of eggs they simply will raise it up as normal, if you add a queen or queen cell they simply kill them. With this scenario it is easier to get a new colony or nucleus from a friend, move the laying worker colony 100m away from the old site. Put the new colony on the site of the old hive and the simply shake out all the bees from the laying worker colony onto the ground. Most of the bees will go back to the hive which is now the new, queen right colony whilst a small number of bees and the laying workers will be left on the grass and will die. If you do this towards dusk the bees will be allowed into the hive a little easier than in the heat of the day.

Continue with the regular inspections and have a good summer.

President of the Guernsey Beekeepers’ Association. 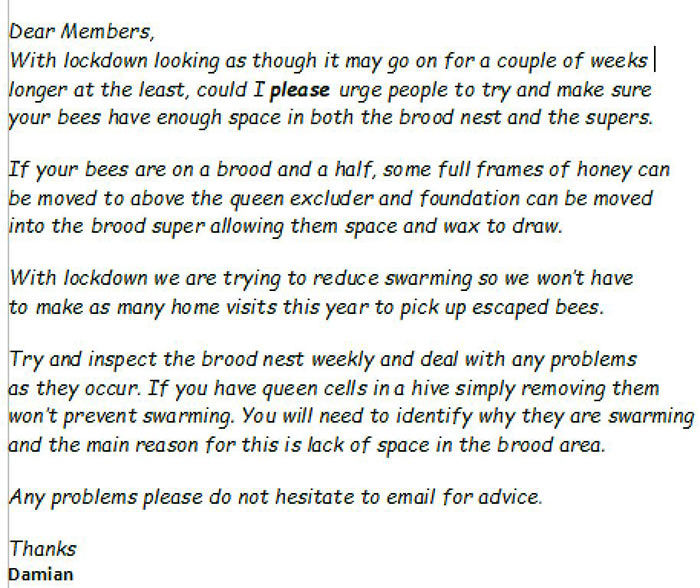 With the Covid-19 outbreak causing so much devastation globally it seams very trivial that we discuss bees and what needs to be done.

At this critical time of year we need to make sure that we prevent problems such as swarming, especially since we now have an island wide shut down as is the situation in the UK. We also need to ensure to the best of our ability that our bees are not going to be causing a nuisance - there is enough to think about, and little work now can prevent problems later.

The weather is getting warmer and the bees will be bringing in food. We need to make sure they have enough space, both within the brood nest and for storing honey.

Its perfect weather for a first inspection of the brood nest and some members have probably already done this.

Make sure that any frames of ivy honey are removed from the brood area and replaced with either drawn frames or foundation. This ivy honey can then be uncapped and placed above the crown board for the bees to clean. If it’s set solid and the bees can’t work it, these frames can be uncapped and then soaked in water overnight and then fed back to the bees. The water will have softened the ivy honey. These frames once empty can be reused.

Make sure the queen has plenty of room to lay. Making sure they have a brood and a half or even add another brood box. This will help reduce over crowding in the brood area.

Supers should be added, and it may be worth adding 2 or even 3 supers to the hive now, in case things go wrong and we can’t get to our bees.

If the bees don’t need the space they will be ok, but they can quickly fill them at this time of year!

If you can’t get to your hives and they need supers adding do not hesitate to let the committee know as we have volunteers who are ready to lend a hand.

These are uncertain times and if we can reduce the potential for swarming it will help everyone if we cannot leave our homes to collect them. At the moment this isn’t a issue, but we don’t know what is around the corner, let’s work together and try to avoid unnecessary problems.

· If there are fellow beekeepers close by that you can lend assistance to, please offer them help, or even help each other.

· If you can help with swarm collection let the committee know.

At the moment we have cancelled all GBKA events until further notice. If you need any help with your bees or any advice let us know.

These are difficult times and we must pull together as a community. We will get through this one way or another. 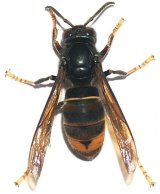 After what appeared to be a successful launch to spring queening in 2019 and a big decline in secondary nests the decision has been made to continue with spring queening this year. The first Asian hornets appeared in 2017 with a queen located in March in the Vale and 2 nests found that year. It is also believed that a nest was missed that year, somewhere around Guernsey candles. This was based on the location of queens found the following year, as in low population densities queens don’t need to move far from the original nest site. In 2018 four queens were located and 8 secondary nests. It didn’t appear that any nests were missed that year, but due to the location of a nest near St Peters Church which couldn’t be treated or removed due to its location, and which was blown out of the tree during gales it appears to have dispersed numerous queens. In 2019 nine queens were caught across the island, seven of which were in traps set up as part of spring queening. One primary nest was located as well as two secondary nests later in the year. It is hopeful that no nests were missed, but only time will tell.

The other Channel Islands are having mixed results. Alderney had 1 nest in 2016, 2 nests in 2017, 55 queens caught in the spring of 2018 as well as 8 secondary nests, and in 2019 they caught 6 queens and have found only 2 secondary nests. This is the largest reduction in hornets on any of the islands. Sark had 1 nest in 2017, 3 queens and 1 nest in 2018 and 10 queens and 1 nest in 2019. Of these 10 queens found in Sark 7 were in traps put out for spring queening. Herm appear to have been untouched at present. Jersey are the worst affected. In 2016 they had 4 nests, in 2017 they had 17 nests, in 2018 they had 4 queens, and 52 nests and in 2019 they had 69 queens and 83 nests. These are, to the best of our knowledge, as the original records coming out of Jersey vary depending on who you are talking to. Jersey have already had their first queen hornet this year. As you can see most of the islands are starting to see a levelling out in numbers or a decrease. We believe this could be due in part to spring queening and it will be interesting to see how Sark’s numbers go this year as they have been doing spring queening and tracking. Jersey appear to be the only island at the moment where numbers are significantly on the increase and what the reasons for this increase we can only speculate about. We will be contacting volunteers again shortly to roll out spring queening so please watch this space.

A big thank you to everyone who has been trapping and looking out for hornets, with a little look and a lot of help we may be able to reduce the spread of this invasive threat.